While silver is significantly less valuable than gold, it is like gold in that it is a very soft precious metal. Pure silver is generally too soft to be used for jewelry, flatware or decorations. It is therefore usually combined with an alloy to strengthen it before being crafted into anything. Like gold, silver is graded by how pure it is, with .999 FS (fine silver) being the most valuable. The numbers refer to there being 999 parts of pure silver per thousand parts.

Pure or fine silver can be used to make jewelry, and it can sometimes be used for silver-plating. To qualify as pure silver, the silver must make up at least 99.9 percent of the metal. Despite its value and shining beauty, pure silver is notoriously difficult to work with. It also tarnishes when exposed to hydrogen sulfide or ozone.
Sterling silver is the most popular type of silver for making jewelry. It is 92.5 percent pure silver, and the other 7.5 percent is an alloy. Most of the time, sterling silver is made with copper, but it can be made with nickel or other metals. The alloy strengthens the silver and makes it less likely to tarnish. Sterling silver melts at a lower temperature than fine silver does and is thus easier to work with. As sterling silver dates back to the 10th century, it is one of the most ancient alloys still being used. It has often been used to make coins as well as jewelry. Sterling silver pieces will often be stamped with a 925. 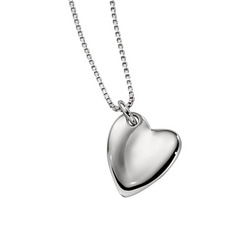 Coin silver is usually 90 percent pure silver and 10 percent copper. It has the smallest amount of silver in a metal that can legally be marketed as silver in the United States. Coin silver is occasionally used to make fashion jewelry.

Electrum is a naturally occurring mix of gold and silver that was used to make jewelry and coins in ancient times but is rarely used today. Silver makes up about 40 to 60 percent of the metal, and its color varies from silvery white to light gold. People who collect ancient jewelry make a note of the silver/gold ratio in electrum, for it can indicate the item's history.

Silver-plating involves coating a base metal with a layer of silver. The two most frequently used methods are filling and electroplating. Filling or rolling involves bonding the silver to the base metal by heating it. In electroplating, the craftsman uses electricity to permanently bond the silver to a base metal. Electroplated items are often described as silver plate. Both filled and electroplated items will have stamps denoting the type of silver, e.g. 925 for sterling silver.

Nickel silver or German silver isn't silver. It's actually any of several alloys made from copper, zinc and nickel to mimic the color and luster of silver. It is used to make costume jewelry – and it should be plainly marked as a nickel alloy for many people are allergic to nickel.